Jennifer Tarle is among my favorite pronunciation teachers. That’s why I’ve been following her activities, keeping contact her since I published my first article about her. Some weeks ago, she held an online free class about top 10 consonant and a little later about to 10 vowel mistakes. However, consonants can also be tricky and hard to learn, the American vowels are even greater challenge. That’s why I’m going to write about her lesson on vowels. It won’t be only a summary, but I’m also going to give my views and thoughts to some parts of Jennifer lesson.


(Updated on May 10, 2015: Links to individual sounds of Jennifer's "Vowel sounds" series are added.)


If you want to follow this episode, you need the handout that Jennifer provides you. 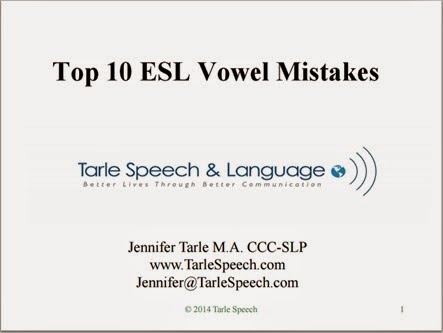 You can watch the lesson on youtube clicking on the following link.

In her Lesson, Jennifer was speaking about two main topics:


Due to length limits, I would like only to emphasize some issues about the first part.  I clearly remember the first words of my first English teacher: “In the English language, there is hardly any connection between spelling and pronunciation. It’s definitely hard, almost impossible to connect them. You SHOULD learn them separately plus the meaning.” You can read more details in my former post here. Well, it true that the English spelling is pretty crazy, but there are some rules that each language learners should know. So I find extremely important what Jennifer talked about in this part. In my opinion every English teacher should include these issues in their lessons. The sooner they do, the better.

In the second part, Jennifer was speaking about these 10 common mistakes:


I have to add that Jennifer didn’t use IPA symbols in her handout nor in her video, but I added them here. Why? In writing I prefer IPA rather than the old terminology based on Long and Short vowels, but of course it doesn’t affect the general message of her excellent lesson.

Short A /æ/ sound  (handout page 9)
What Jennifer said about Short A /æ/ is true, and I also confused this sound with others. However, there are a lot of problems with confusing the short E /ɛ/ sound. That is why I was writing about these sounds in the same article (cattle vs kettle).

In addition to Jennifer’s lesson, I would like to mention an interesting thing that was very hard for me, because I learned British English in school. It happens several times that the Letter A is pronounced as /ɑː/ (similar to Short O /ɑ/) in British English, while as Short A /æ/ in American English. When? For example: after, answer, dance, chance, can’t, ask, last, pass, half, bath and so forth. As I read it was the same in Great Britain 300-400 years ago. American English preserved this pronunciation pattern, but the sound changed in British English.

American English follows more frequently the Consonant – Letter A – Consonant -> Short A /æ/ spelling & pronunciation pattern. Of course there are some exceptions such as “father” is pronounced with Short O /ɑ/ in American English as well.

Short O /ɑ/ sound (handout page 9)
I like this part of the lesson as well. I would like to add to this part that Jennifer is the first pronunciation teacher in my life who teaches the vowels after the so called cot/caught merger. That is why you can see some words (such as bought) here in her transcript and video.

What is cot/cought merger? This is “the actual loss of the aw /ɔ/sound in certain dialects of American English. Those dialects typically only use the short o /ɑ/ sound (instead). It is up to you if you want to learn these as separate and distinct sounds, or not. I am neutral on the matter. I say them as separate sounds, but I recognize that some people do not.” (Mandy Eagle) 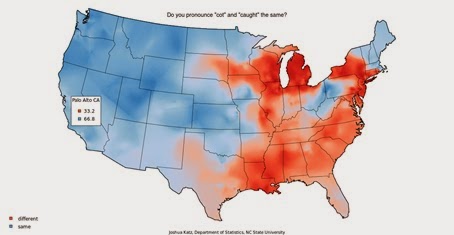 Similar vowels – Long E /i/ vs Short I /ɪ/ (handout page 10)
These sounds can be very confusing, but Jennifer provided one of nicest explanations I’ve ever heard how to distinguish these similar sounds (or you can say described, demonstrated once of the nicest.) Unfortunately this video was published after I wrote this blog post about sheep vs ship.

R vowels – Short R /ɚ or ɜ/ vs Long R (Handout page 11)
Of course the R is a consonant and not a vowel. To use “R vowel” can be confusing. Maybe it’s better to say “R controlled vowels” or “R movement sounds”. I hope Jennifer is not angry with me because of this slight critical remark.

She mentioned that many people leave out the “R”. Maybe some people may do it because of their former British English studies. I don’t know. Let’s look at the word “car”. I learned this word to pronounce without R sound. Check it here (British). Later I began to pronounce this word with R sound after speaking a lot with Americans. Check it here (American).
Of course if someone has a problem with this sound, it may be due to several other reasons. Anyway, anything can cause it, Jennifer helps you.

Movement vowels – Long O /oʊ/, Long I /ɑɪ/, Long A /eɪ/ (handout page 12)
Many people have a lot of problems with these and other diphthongs. But now I would like to concentrate on something that happened more than 300 years ago. It is called “The Great Vowel Shift”. In Middle English, these diphthongs didn’t exist. According to this video, the Great Vowel Shift was a systematic change in the system of English vowels between the 15th and 18th century. Many vowels changed, but the pronunciation stayed the same. It is one of the explanations of the difficulties of spelling and pronunciation.

Short vowel – Short U /ʌ/ (handout page 13)
I also heard that many people say the letter that the word is spelled with, not the Short U /ʌ/. Well, I’m not the expert of different British dialects, but maybe I heard something similar from some British people. Or from my favorite British sitcom that is You rang M’Lord; as I wrote here. So sometimes this mistake can happen because of former studies, but I think generally there can be other causes as well.

As for me, I had great difficulties with this sound. I could hardly distinguish the Short U /ʌ/  (like in bus) and Short O /ɑ/ (like in boss) sounds. Then my favorite pronunciation teachers (including Jennifer) helped me a lot.

In addition, from this video I learned that the second vowel of Jennifer is Short U /ʌ/, and not Short I /ɪ/.

Besides this excellent lesson, I recommend Jennifer’s books again.

These two books excellently complete the free videos. Watching the videos one by one on Youtube channel then going through the audios and practicing a lot can be the best way to learn each sound. In the books and audios, Jennifer gives clear explanation of creating, and spelling patterns of each sound, in addition she gives examples of the sound in beginning, middle, end position of the word as well as some practice sentences.

You can join Jennifer’s next free lesson about word stress in American English (US Central time) on May 1, 2015 form 7.30pm to 8pm (US Central time – so it can be May 2 for you). I’m also looking forward to it.